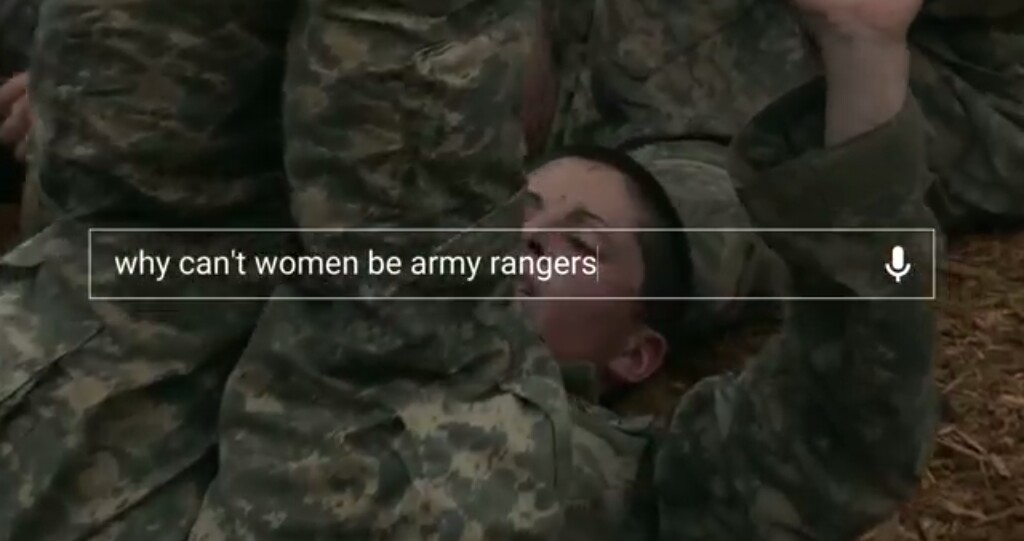 In the 2015 Google Zeitgeist video, a question popped up. ‘Why can’t women by army rangers?’ After watching the video, I went online to google ‘army rangers’. What I saw was not funny. Army rangers are not those who sit at the back and watch others take the bullets for them. In times of war, death is an expectation. And still, we have women who want to be army rangers. And this is where the issue of Gender Equality comes in.

I love the idea of gender equality. It’s beautiful and it’s only natural that we should let women enjoy the same rights men enjoy. But hey, it’s not only the enjoyment part. It’s every part. The good, the bad and the ugly. And this is why I admire women who want to became army rangers. They know it’s not easy and they still want it.

See, it is always easy to cry for gender equality when all you are crying for is equal pay, equal job opportunities, equal show of respect, equal right to education, equal rights in marriage and the likes. These are good things. They are also the easy things. The question now is, will you still want your gender equality when the hard things come in? If not, then you really shouldn’t be asking for equality at all. You should just take the back seat and let those serious with equality do the talking.

I am a supporter of gender equality. I have a little sister in SS 2 right now and I want her to be treated just the same way her male counterpart will be treated. This is not because of anything special. It’s simply because she is just as human as the boy. Now in times of difficulty, I will still hold on to this belief. It gender equality means a girl will have to also jump up twice before entering a place women are not allowed to enter before, a place where men enter once they can jump up twice, then the girl should be ready to jump up twice. It’s that simple. And that is my idea of equality.

Two annoying things happened to me recently and that’s why I’m writing all this. Here’s one of them:

Yesterday, I was on my departmental WhatsApp group when a sensitive issue arose. We were to have a party and the gate fee was N300 for both boys and girls. Now, before I go on, I think you need to have an idea of how things work in my school. Whenever there is a party, only guys get to pay. It’s always free for girls. And really no one has ever complained, at least not loudly. And no one saw anything wrong with this annoying idea. Until recently.

When the message got out that the gate fee was for both male and FEMALE, there was an uproar. Girls began to shout that they could not pay anything. That they would not pay a dime and would still enter the venue for the party. I was disappointed to see girls whom I had respected because of their view on feminism and gender equality scream that only boys ought to pay. That is how it has always been and that is how it will always be. I felt annoyed.

I asked one of the girls why they did not want to pay and she said because it’s not right. And then you begin to wonder who or what determines what’s right or wrong.

My question was simple. Why would you want guys to pay and you would not want to pay? It was not as if the guys would get a special ‘package’ or anything. Boys and girls would go for the same party. Listen to the same music. Dance on the same floor. No special benefit for the boys. And still you want the boys to pay and you are not willing to pay. Where then does your knowledge and advocacy for gender equality comes to play in this?

One of the guys who was also supporting the girls called it exploitation. That it was exploitative of the departmental government to demand a fee from the girls. The ignoramus did not see anything bad in him paying. But he saw everything bad and exploitative in the girls paying for the exact same party? Where did we miss it?

I asked another girl what was up and she told me to ‘shift joor’. When I mentioned her stand on gender equality, she told me to ‘forget that one’. I was shaking my head.

See, the problem with us is that we don’t know what we want. We don’t even know what gender equality and feminism is. When it comes to election period, girls begin to ask questions like, ‘Why can’t a lady contest for the post of the Students Union Government President?’ But when it comes to issues of responsibility and money they forget everything called Gender equality. It is such a shame that people like Chimamanda are busy sweating on the stage of Ted Talks just to get us gender equality and the ones whom she fights for are screaming that they want to remain inferior to men.

Eventually, hours to the party, they announced that it was free for girls and that boys will still pay the N300. Now, the issue is not that we don’t have N300 or that we are poor. I am not the party type myself. But the issue is with doing the right thing. See, whether it is easy or not, what is right is still what is right. You shouldn’t support gender equality when it favours you and then shy away when it doesn’t. That’s stupidity and hypocrisy living in the same flesh.

I am annoyed. Really, I am vexed. This is not gender equality. I started with army rangers. Do you know why? To show you that those who really want this equality want it in all spheres of life: easy and hard. The work of an army ranger is not bread and butter. But still, they want it. Equality is not only standing up when the sun is shining. It is also standing up when it is burning.

I stand for gender equality and feminism but what I see outside, that’s not gender equality. It’s not even feminism. It’s simply nothing! Nothing at all. Really, I’m annoyed.

I know this is kind of unexpected and long. I didn’t plan it. Just felt like I needed to voice this out on all my platforms. I’ve put it on my Facebook wall and it’s here too. This is to show how passionate I am about this topic. Kindly let me know what you think in the Comments. Thank you.

17 thoughts on “On Gender Equality.”