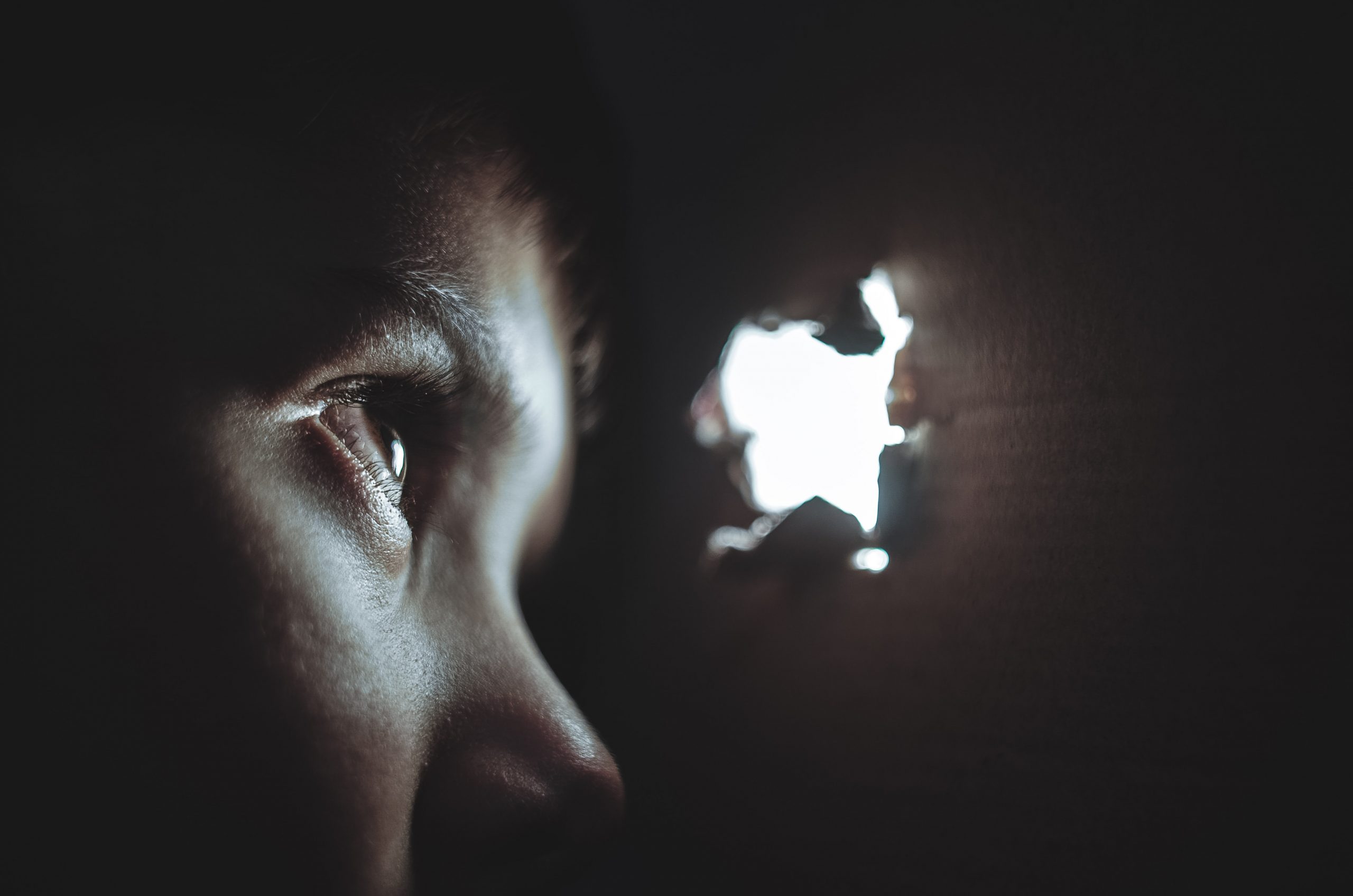 Let us stop playing this hide and seek.

See, when I was in junior secondary school, there was this girl I loved. She had the eyes of the sun and the smile of the moon. She was beautiful. Orifunke, in all fairness, there is no one like this girl. Her name is Taiwo. Yes, she is a twin.

I met Taiwo through my sister. The way the good Lord would have it, my sister and her sister were classmates so it was only normal that we would meet at awkward places every now and then. But then, we are talking about 2011 here, OL. That was nine years ago. Then, I did not even know how to spell ‘confidence.’

I wanted to date Taiwo. Though if you had asked me then, I would have told you I just wanted to be her friend. What a lie! How can anyone see Taiwo and just want to be her friend? That would be a waste of friendship. But then, this was me in 2011.

The competition for Taiwo was high, OL. I cannot even tell you that I was the most qualified. I was not. There were some boys back then who were better candidates. They were taller than me and they already had muscle and beards; two things my village people are still hiding from me till date. These guys were fighting for Taiwo with me. It was like a tug of war. You know, one of the terrible things that patriarchy taught humanity when it visited was this idea that a woman was to be fought for, to be considered and weighed, like a commodity. There is a word for it. Objectification?

Again, this was 2011. Who cared about objectification? Or feminism? Or gender equality? Certainly not me. I only cared about Taiwo. And her hair. Just like you, Taiwo was on low-cut. And she had jet black hair, the type that shined in the sunlight. I tell you, Orifunke, if Taiwo walked past you, you would turn in amazement and ask God if he truly rested on the seventh day or he was busy creating Taiwo?

You know what was even more shocking about my crush on Taiwo? It was reciprocated. I will not lie to you, OL, I did not understand. This was Taiwo, the crown of the kingdom, the desire of all men and women, queen of the Andals and the First Men… And here was I, a mix of Tyrion Lannister and Lord Varys without their brains and wit. I did not have the balls to talk to Taiwo.

By the way, I started following Lady With Balls some years ago while I was in the university. I did not know then that you were the brain behind the beauty. I only followed because I enjoyed their Instagram posts. They were always motivating me to do more and be a better version of myself. I did not get to know about your connection to Lady With Balls until I got into an argument at Oduduwa Foyer at Obafemi Awolowo University. I had posted a picture from your Instagram page on my WhatsApp status and my village people were asking me awkward questions.

“Michael Inioluwa, why would you be following these people? What are these girls trying to say? All these single girls with failed relationships. What does ‘lady with balls’ even mean? Can a lady have balls? Let us not in the name of gender equality forget that God created us differently. And nobody can change how God created things, Michael. There is a natural order of things, Michael. You people are missing this all in the name of feminism.”

Orifunke Lawal, I apologize on behalf of my village people. You see, we do not have a school in my village. But then, I digress. Where was I?

Taiwo… I did not have the balls to ask Taiwo out. It felt like a big deal, like the end of the world, like Master Jesus would see me and finally decide that it was time to put an end to the iniquity in the heart of men. While I was gathering the balls to talk to Taiwo, some other men, wicked men from the pit of hell were shooting their shots, trying to steal what was mine. But then, my God did not fail me. Taiwo turned them all down. And just like that, she began to look at me.

We would signal to each other on assembly ground. We would smile at each other and quickly look away. There were times I would intentionally go to Taiwo’s class to borrow broom or duster just to behold her beauty. Orifunke, I know you may think I am exaggerating this beauty but you have to believe me here. I am not. Have you ever seen the elements gather to make a beautiful sky with clouds and sunset? That was how the heavens conspired to put all the beauty of the whole world into one person. And that person was Taiwo. Taiwo with the low cut.

But then, I did not have the balls so I could not shoot my shot. And this was 2011. The concept of ladies shooting their shots was nonexistent ; another thing patriarchy stole from us.

After some weeks of eye contacts, Taiwo and I resorted to hide and seek. We would go to each other’s class during break to do absolutely nothing, just to look at each other. Imagine that? Just imagine? At a point, I could no longer take it. So I found some guy who told me he was Taiwo’s cousin and that he would give me Taiwo’s phone number if I was ready to pay some amount. I did not waste time. I went for it. This cousin asked me to bring N500 to collect the number.

Funke, I wish I could tell you I developed the balls to approach Taiwo and ask her out. But then, my village people did not let me. Instead, I saved my pocket money and transport fare for two weeks until I had the money and I paid the cousin. Then he scribbled the phone number on a paper and gave it to me. I was the happiest man on earth. I got home and waited till 11:59pm for MTN Xtral Cool. And then I dialed the number.

It rang twice and then someone picked.

“Hello Taiwo,” I said, shaking terribly like a man under the anointing. I waited for some seconds and then the response came. The Hausa man on the other end of the call rained what must have been curses on me in a loud angry voice before he finally cut the call. That night, I cried blood and I thought of a thousand ways to kill that terrible cousin. Just like that, I was duped. It was the first time in my life.

But then, that experience gave me the balls I needed. The next day, I did not play during breaktime so my white socks would not turn brown. I waited until closing time and then, instead of playing hide and seek with Taiwo, I approached her and began to stutter.

She stared at her toes while I looked at her hair. I wanted to touch it. “Good afternoon, Michael,” she answered.

And then the world stood still. My mouth was empty. There was nothing else to say. So Taiwo and I stood there for decades before I finally asked, “Can you borrow me your CRK note?”

She nodded and reached for her note in her bag. I kept on staring at her hair. She brought out the note and handed it to me. I collected it and our hands touched for a fleeting moment. In that small moment, OL, I knew she was the one. We looked each other in the eyes and I could see the love in her eyes.

“Thank you. I will return it tomorrow,” I said when we finally recovered from our romantic shock. That day, we put an end to our hide and seek and decided to do better.

Orifunke Lawal, I do not write this to you because I am thinking of Taiwo. In all honesty, I do not know where she is currently. But I am writing this so we can stop our hide and seek. Since I started following Lady With Balls a long time ago, we began playing hide and seek. I started liking the posts there and then from there, we moved to your newsletter where you opened up to me about your haters and that one mistake you keep making. You even told me about how you found the love of your life. I found that offensive. Why would you do that to a single man? Just why?

And then we had the conference online but then, it was not what I hoped for. It was not like it would have been if we met in Lagos. After the conference,  I had given up. Perhaps, you and I are meant to play hide and seek forever, OL. But then, my village people refused to let me rest. The other day, I was telling Emmanuel Faith how I am sometimes uncomfortable whenever my WhatsApp status becomes waist bead. You know what he said. He said, “Michael, people will always check your status because you post value. And your status is not even waist bead. Don’t you see Orifunke’s status? And hundreds of people still check it.”

I smiled and said thank you. What Emmanuel Faith did not know was that, I did not even have your phone number. How was I to see your status when we were still playing hide and seek. I could have asked for your phone number from the countless people on my contact list. But then, that would be me going back to 2011 to ask that wicked cousin for Taiwo’s number. So instead of going through the back door, this is me calling out to the world.

Orifunke Lawal, let’s stop this hide and seek. My DM is always open but this is me walking to yours and asking, Will you open the door?

We Pick Up Broken Things…

We All Wear Masks